As a few of you may know I’ve been swimming through some icky health waters the last couple of months. After some tests and a trip to the surgeon we found out the main culprit of my irritations. Yesterday I had out-patient surgery to correct that irritation. The procedure went along smoothly and I came home snorgled out of my gourd (read that as: They gave me a lot of happy drugs so I wouldn’t feel or really remember what happened) and camped out in a recliner all night in la la land. Today I’m mostly more coherent, but the pain of the surgery is slowing me down a bit.

I’ll be on some heavy meds for the next week or so and keeping myself away from the aetherwebs so I have a little time to relax and heal. Then I’m hoping things will finally be back to normal again. I’ve been working at half capacity and very distracted for months now and I feel like that’s put me behind on so many things. I’m happy I can get back into my sites at full strength again! 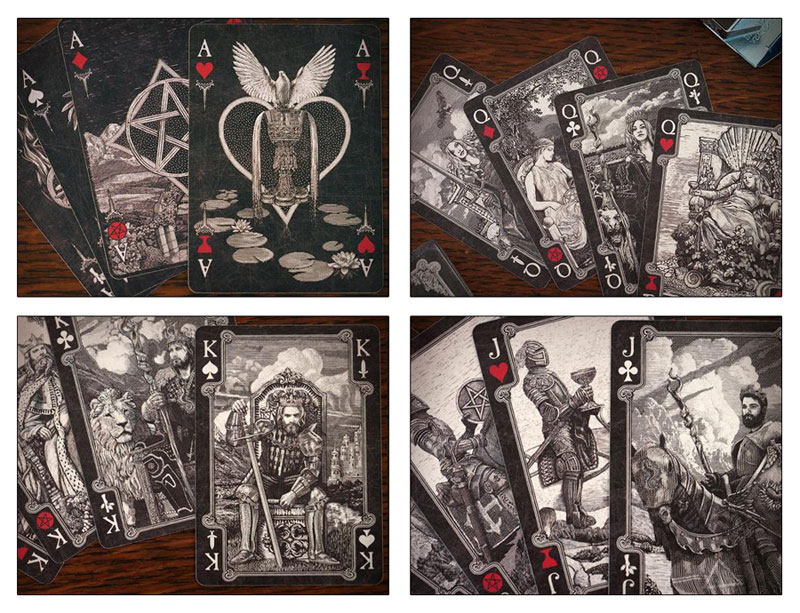 I’ve had these cards bookmarked for awhile now and I hope to nab them one day when my coin purse is full of coins and not cobwebs. The deck is described as “ntricately drawn, stunningly unique. Arcana Playing cards blend the traditions of standard playing cards with the secrets of the Tarot. Each royal is drawn with an unprecedented amount of detail in a engraved style. Featuring 12 uniquely crafted Royals and Aces, 4 Major Arcana cards (The Fool, The Lovers, Death, and The Tower), and standard pip number cards.” and is available for a very wee price. You can nab one here.

This is a really nice dark and moody deck that I came across by pure chance while doing a google search, which is strange! Me being a fan of collage art, the tarot, and all things dark and mysterious I should have come across this deck before. So thank you random google search algorithm. The deck description states “The deck takes a subtle and psychological approach to the Gothic. It draws much of its atmosphere from the 19th century Gothic writers such as Edgar Allen Poe, Sheridan Le Fanu, Henry James , Louis Stevenson, and Bram Stoker.” and indeed it does that. It’s simply beautiful. The deck was created by Alex Ukolov and Karen Mahony and published in 2007. It’s currently on its third edition and is available for purchase here.