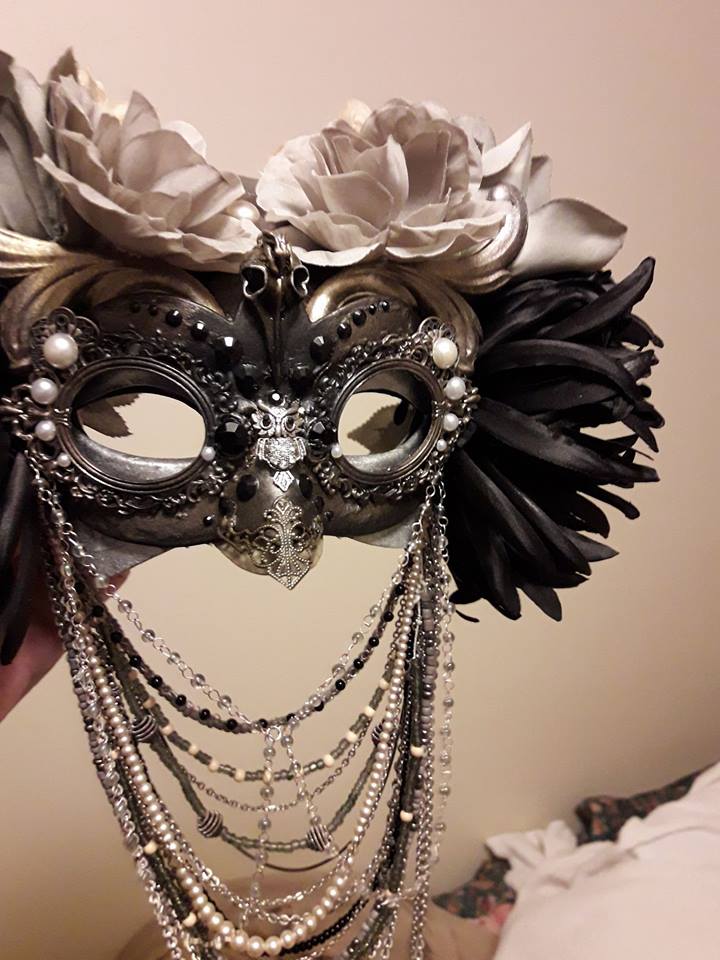 Posts have been a little slow as of late. During the day I’m working on fulfilling my sale orders and during the evening I’ve been tackling my costume for the first convention of the season. Most of that working has been on my first mask, pictured here now that it is finally finished. The mask will have a dual purpose as the gent and I will be vending at the Midsummer Masquerade soon as well. And really? I wanted a huge and fabulous, slightly dark, detailed costume that I could put on like a second skin and move through the convention menacingly while innocently handing out candy. Or something like that. It’s a steampunk convention with a super heroes and villains theme. I wanted to be Poison Ivy, but she’s kind of the go to for a lot of people. So I made up my own villain.

I have three animals on my personal totem: The black rabbit, a carry over from my childhood when I was obsessed with the book Watership Down. The white fox, which comes from my love of kitsune in Japanese folklore. And finally the wise owl, companion to the goddess of wisdom Athena; most famously (for me) crafted as Bubo in Clash of the Titans to aid Perseus so Athena didn’t have to send her own beloved owl. It might have struggled with Greek mythology, but that was another place where my mind got interested in certain subjects as a kid. Plus, as an adult who attends steampunk functions, mechanical owls are a thing. I wanted it to look somewhat old, slightly mechanical, but regal with a lot of little parts. And the mask does have all three of my critters. Obviously the mask is meant to look like an owl, plus it has a jeweled owl between the eyes. At the top of the tiny bird scull is a small rabbit. On the back of the mask I drew my fox, which looks a lot like my white feline Ghost, who I’m positive is just a fox pretending to be a feline so I would take her in when I found her as a wee qwueeber in my backyard so long ago. I mean… everything doesn’t have to have a meaning or symbolize something… it’s just more fun that way!

Anyhoo, as I was saying, I’ve been a bit busy for web stuff at the moment. I will get back into the swing of things. In the meantime I have my costume progress and con things over at my personal blog. Or, better stated, I will soon. That site is fighting with posting at the moment so I’m giving it a time out. (With plenty of disapproving scolding finger.) For the record, mask making and art doll making have been on my list of things to try. Basically I wanted to see if I could create 3D designs of my brides artwork, seen here. That is my Black Cat and Poisoned Tea Society collection. I’m rather pleased with my first attempt. Now I should get back to work. Toodles noodles!

Happy Tax Day! I wish I had remembered that when I trekked out today to put this weekend’s packages in the mail. And we had such lovely arctic spring weather for the long walk to actually get near the silly place. That aside! I’m down to my last 14 orders that I’m packaging up tonight. Most of these are international because the packaging part is a little different to try and keep shipping costs down and of course the customs forms. But I’m moving right along with that.

In related news, after tending the inbox for me and taking requests, Maggie has suggested we put the Sea and Sands decks up for a little longer. I agree. We have a special display for the decks at our first convention at the end of the month, so why not offer a few more leading up to that? Shipping times for these decks will be one to two weeks as we have them on hand. If you’re in the midwest and attending the Cincinnati Steampunk Symposium the last weekend of the month you can avoid postage costs and order one to pick up at the con. Just contact us to order and get pick-up details. 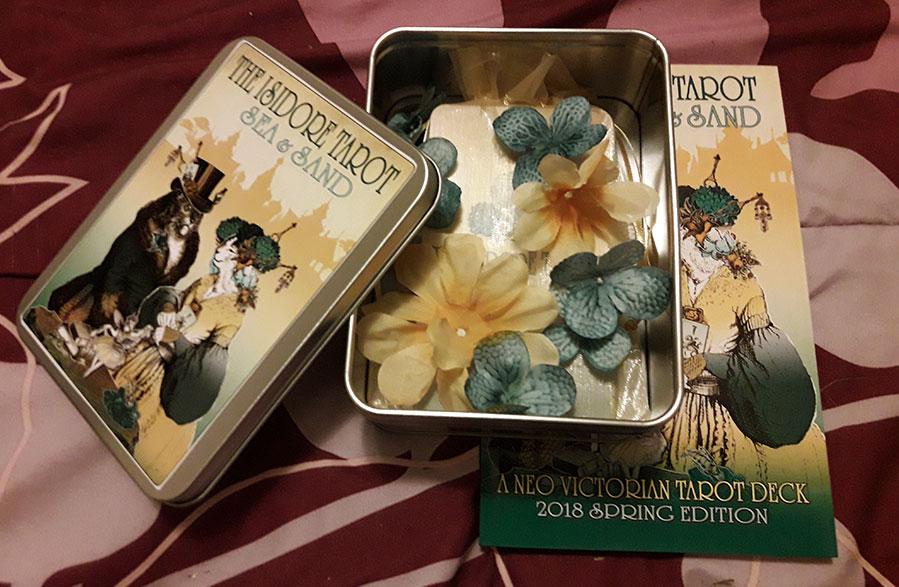 As anyone said it to you yet? No? Really? Really!! Okay… I’m taking a deep breath here… MAY THE FOURTH BE WITH YOU!!! That goes out to Bethany, the biggest Star Wars geek I know besides my big brother, and as it happens the model for this tarot’s Fool card. She is a very creative person in her own right, so if you have a moment pay her site a visit. Oh wait… crap… of course I was the first, it’s only April. I got too excited by posting the end date of this sale as May the Fourth. We’ll revisit that in exactly one month from today!

Now, I’m pleased to say the third edition of the Black Ibis Tarot is now available for sale. The cards are larger in size in this edition and this makes the details of the card artwork standout more. I also pumped up the colors a bit to make them more vibrant, as well as adding a blue note element to each card to unify the majors a bit more. The deck is very beautiful if I set modesty to the side. I really adore this deck. And like the Sepia Stains deck, there were a lot of wonderful creative folks who lent their images to the deck. I’ll be highlighting each over April.

The pre-order will run throughout April. At the conclusion of the sale all the decks/materials will be purchased and shipping will begin most likely the second week of May. The deck is available with full packaging or just the deck/book depending on your budget. So if you’d like to give a slightly surreal neo-Victorian fantasy deck a new home, please select the link for what you want: Order Full Packaging Deck Here -or- Order Just Deck/Book Here