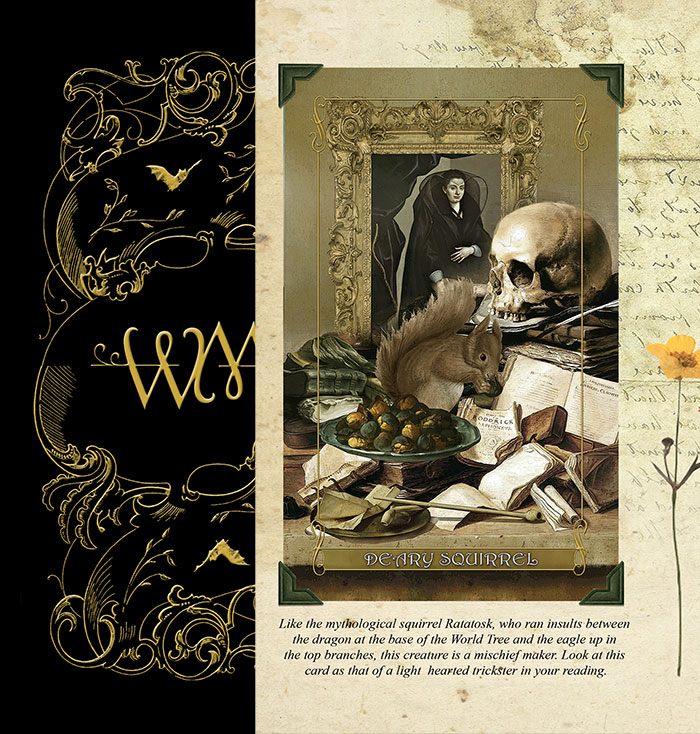 So (I insert here a long, somewhat sad, dramatic pause) the wonderful TheTarotParlor pointed out a typo in my Lydia deck on the Happy Squirrel card. So first! A wee background on this card – which you probably already know, but since I explained it to my friend Kate this past con (her having literally no time left in her life for things like pop culture) I realize not everyone knows the squirrel card.

Long and short – the Happy Squirrel card is a brief moment in an episode of the Simpsons when Lisa goes to a fortune teller tent and gets a tarot card reading. She gets all the bad cards and then the happy squirrel, to her delight, until the fortune teller drops back in horror. It’s one of those cards you will now find in some decks. Some people like it, some don’t. I put this card in mine where it fits. Isidore and Lydia decks both have happy squirrel cards with my own twist. The Isidore Tarot has a happy squirrelthulhu cuz… I don’t know, tentacles! Lydia has a dreary squirrel card because it is a darker deck that still keeps a pinch of humor. The problem? It was pointed out to me that I did not type dreary and no matter how I looked at that card I never saw the typo. I put deary squirrel. Ugh! Double ugh!

I have printed and adopted out so many of these decks at this point. I have an entry in both companion books where dreary is in the meaning literature while the card sits there all lacking an R. My proof reader didn’t catch it! So what to do??!! Accept it I decided. It almost seems like a small joke the woman who is Lydia Wilhelmina might play. She grew up in an era where there were many older woman who might refer to her as deary, and some of them might have voiced it with mischief quietly hidden behind it. She might have done the very same thing herself. So this deck is owning its boo boo and quietly dragging it into the mythos that is the Lydia deck.

And hey… maybe that dreary squirrel comes running out all full of mischief and dark mirth before suddenly pulling a nice tea pot from behind its back and saying “Oh hello there deary! I am a squirrel… I’m here to be naughty. Tuck in!” 😉 Yeah… I’m going with that. TOTALLY!!