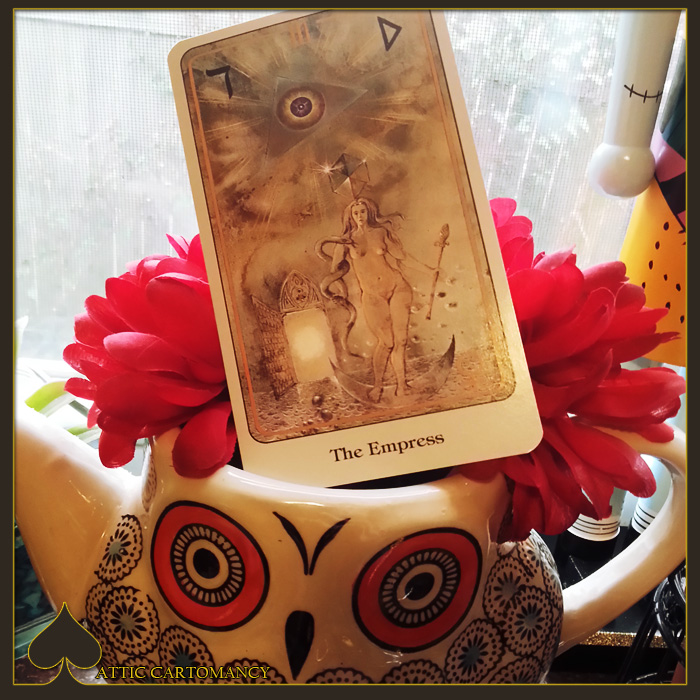 There is a bug going around and I don’t recommend you invite it in for tea. Tell it there is no tea, no soda crackers, no coffee, and absolutely no girl scout cookies to be had so it better move on to the next house. Now, if it tries to tempt you to let it in with offerings of tea, soda crackers, coffee, and thin mints be strong and point it up the road. It’s taken my household about four weeks to get this bug out of our systems and we still sound like a bunch of chain smokers who occasionally gargle broken glass for the ambient noise. Now, with that said, back to the card of the day posts!

This will be my first card of the day that is not from one of my own decks. Today’s card is the Empress and it was drawn from the very first deck I ever bought myself, the Haindl Tarot. If you’re unfamiliar with this deck let me start by saying it’s incredibly beautiful. It was created by Hermann Haindl and was first published at the start of the 90s. The symbolism is very non traditional and features imagery that spans Native American, Quabbalah, I Ching, and Runes themes. It was absolutely not a beginner tarot reader deck. I simply fell in love with the artwork.

For a long time I used this deck for my daily creative writing. Writing, for me, is a skill that needs to be maintained to keep it from getting rusty. So I usually set aside a half hour for a quick bit of creative writing. I would shuffle this deck and pick a random card and use the artwork and symbolism as the topic of that writing. I especially loved the Empress card because of how haunting and mysterious it was. It didn’t matter if I picked it on multiple occasions, there was always something new there for me to write about.

The Haindl Empress shows a woman standing atop a moon-like crescent shape that floats on water. One arm is encircled by a snake and in the other she holds a pine-comb topped scepter. Above her is a floating eye and behind her an open doorway. The symbols above is the symbol daleth, the 4th letter of the Hebrew alphabet and comes from the word door. Floating directly above the woman’s head is a shape like the hagal rune. From the book Pictures from the Heart: A Tarot Dictionary (by Sandra A. Thomson) it explains “In the Renaissance card, the figure is Eve. The ‘mother of runes,’ Hagall, enclosed in a hexagram, is one of the runes that appears on the Haindl Empress card. As the ‘framework of the world’ rune, it represents cosmic harmony.” This Empress card has a lot going on.

Try as I might this card still inspires me to write. So my intentional reading ended with me spending an hour writing about a goddess whose name has been forgotten to history, forever standing just outside a door to reality, peering in but never returning to it. That in itself is rather therapeutic. I haven’t done much these past few weeks creatively except find new and interesting ways to complain about how crappy I felt. A good somber story about a mysterious woman makes my heart happy.