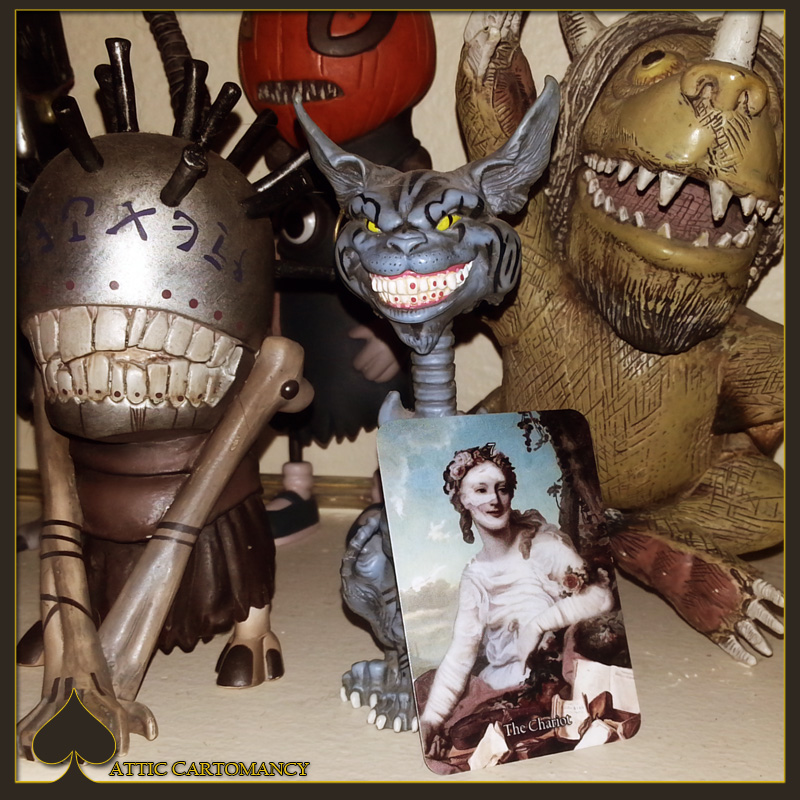 Now that my mini decks have arrived I decided to see how my own Attic Halloween Tarot’s mini deck felt. It was a little slow going because I had a solid ten minutes of squealing It’s so cute and tiny! Once I got that out of the way, I gave it a shuffle and the first card I pulled from it was the Chariot.

With my Halloween deck there is no symbolism offered within the card’s artwork. Each card presents a scene, like you’re peaking your head through a window and for a moment catching something you were not meant to see. In this respect I consider the cards more of a meditation through traditional tarot card meanings. The Chariot card, in general, is a triumphant card. It’s about winning the battle and what you’ve learned from fighting the battle itself. It is about feeling your full self confidence when taking on a challenge and meeting that challenge head on strong and confident. There is also a quite literal meaning to it as it pertains to traveling. It might be a time to hop in your chariot and hit the road.

When I was designing this hidden scene for my deck the mummy came to mind. I don’t know why. I just saw this classic painting of a woman who has battled up and out of the tomb and now sits in a pleasant scene with her wrappings coming off. In front of her are the spoils of that fight and the travels she has taken since winning it. I thought it fit the Chariot.