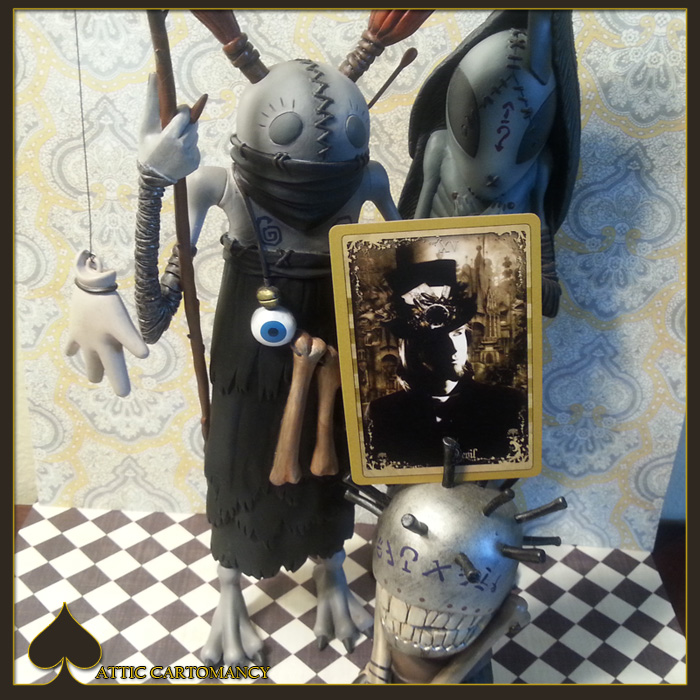 The devil card just came up as card of the day not so long ago. You can read that post here. That card was from my Isidore Tarot deck and very close to the symbolism from the Rider Waite Smith tradition. Today’s devil is from my Black Ibis Tarot where some of the symbolism can be matched to the RWS deck, but in most cases is quite different.

This is one of my favorite cards in this deck, not for meaning, but for the model who let me use his mischievous mug for it. Gerald Brom is one of my most favorite artists hands down and a great influence on me. I’ve also had the pleasure of being able to ask him advice and for favors over the years. This card was one of those favors. I really wanted him as the devil. If you’re familiar with his work you’ll know that such a request didn’t bother him one bit.

The Black Ibis Tarot’s devil is more about whispering in your ear and giving you all the wrong advice. In one sense it has much the same meaning at the Isidore Tarot’s devil, but in this case perhaps you’re already aware that you’re trapped in a bad place and want to be free of that bondage. This devil doesn’t give you the illusion that you are actually trapped; he simply strokes your ego and tells you everything is aces and that you actually like being in that bondage. He is the devil on your shoulder, the voice in the middle of the night that tells you everything is swell, and he knows a lot of tricks to keep you held back in that place. I like to think of this card as one that reminds you that there’s just a con artist behind that alluring voice and it’s about time to shut him down and tell him to shut up. You can try and blame him for life’s messy patches, but in the end only you can actually pick up a mop and bucket and clean it up and get on with life.

In this photo my Brom card is surrounded by his Plucker characters, who are some very scary dolls in this case. The only thing I like better than collecting tarot decks is collecting creepy toys. I keep holding out hope Brom will do some sort of card deck, but so far when I put in Brom and Tarot into a search my Black Ibis deck comes up first. The heart can dream. Check out his work! It’s very dark and beautiful. 😉