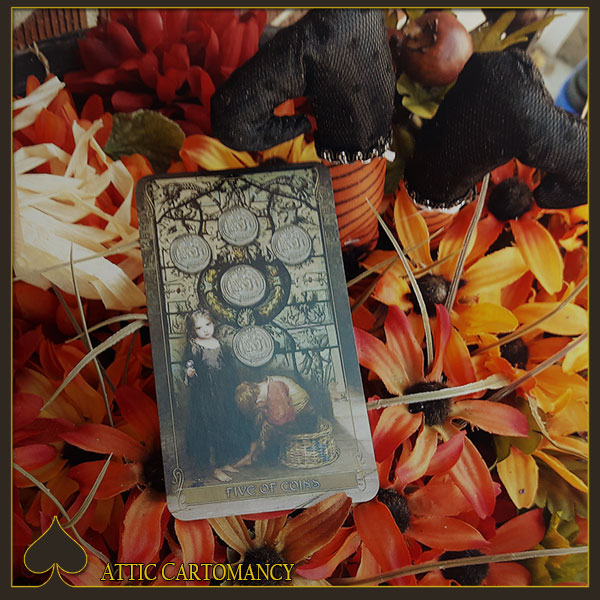 This is one of those mornings where I pulled a card and immediately had the impulse to whistle nervously and tuck it back into the deck like I never pulled it out. At least I can say I pulled it in reverse. However, the last few days I’ve been having give me cause to read too deeply into it.

I drew the five of coins this morning. I think I whispered to my deck you better stop f’ing with me. This is a card I only briefly studied when I was doing the minors for the Isidore Tarot. I was still a novice back then. After working on the Lydia deck I think I’m finally at a point where I feel comfortable with what I’m looking at when I do a reading for myself. I also wanted to tie in the symbols of the cards with the way I created the collages. I wanted whatever dark scene you’re looking at to not only keep the theme of the deck and portray that card’s symbolism, I wanted there to be other things I could link to it for the pages in the deck’s grimoire. That means I’ve been getting really into these silly cards and I just didn’t want to pick this one upon waking.

The two major things it calls me to think upon and address is my current anxiety. My IGG campaign has funded twice over now and has little over a week to go. There is an overwhelming worry that comes with the end of the campaign and the start of the actual perk fulfillment part. There will always been one of two unforeseen costs –like finding the wholesaler you use stops offering a certain piece of packaging. That stacks up. I was reminded of that very abruptly this morning when I confirmed that the post office lost six of my packages from two weeks ago. I fell short on my part as a shoppe owner by putting too much burden on the person who helps me out to keep tabs on the tracking. I allowed myself to rely too heavily on that by justifying it with being ill. We had a miscommunication and now I have some not so happy customers because there was a communication lapse with them as well. Until the post office finds my packages or eventually gives me the insurance for them, I need to replace those lost decks in the here and now and that wipes out my budget. It only takes one poorly timed mishap to send order fulfillment into a place of tension and anxiety. Worse, it takes a little thing like that to put a damper on the customer/seller relationship. And I really do hate making people wait.

The other thing is calls to mind is the fact that as far as the gent and I have come, we still hit financial blocks out of the blue. Already we hit one of those when I had to change my insurance when I got married. Now I don’t have the coverage I had before as a single woman who is self employed. And me? I see the doctor a lot. I get full blood work-ups nearly once a month because of an iron deficiency that we just haven’t been able to make better. We pay three times as much a month now for coverage that mostly covers the prescriptions I need to take. I never used to think about that. But now, as I combat the lingering blood clots in my leg from my fall so far back, I realize I need that blood thinner and paying $500 a month for it out of pocket is not in our budget. Stress. This will sound silly, but when my anxiety level starts to rise, though I deal with it in my waking hours, in my sleeping hours I dream of zombies chasing me. They always end with me coming to a room I can’t escape. I don’t need a therapist or dream analyst to know when I’m worried I’ve trapped myself in a bad situation.

And you know, it might not have anything to do with finances. The biggest thing I contend with on a daily basis is trying to keep my health in check. I’m fortunate that I’ve come far enough to no longer be in daily pain. I don’t wake up dreading the day. I had those years. I’m more of a germaphobe these days. I tend to catch bugs way too quickly and have to deal with them staying far too long. I’ve been trying to get over the flu. The extreme body aches, coughing till my head is exploding, can’t keep enough fluids in me long enough to stay hydrated flu. Lousy creep that bug. I don’t have time to have the flu! All I’ve wanted to do is sleep. Sleep and hope to feel better when I get up. I don’t really have the time to do that right now. But I know if I don’t take the time to get in that rest I just won’t get better. So do I pull this card to think about the possibility of this all getting worse?

However, I did mention that the card was reversed when I drew it so perhaps I should be taking happier thoughts from it. Maybe I should think about doing exactly what I need to see myself better. Maybe one of my hurdles has almost been reached and just needs a little longer. Maybe I should just go draw another card and hope it’s better. I sometimes think with my meditation practices with the deck that every card in there is a very uniquely minded therapist and I’m never sure what thing I’m going to need to talk about. 😉