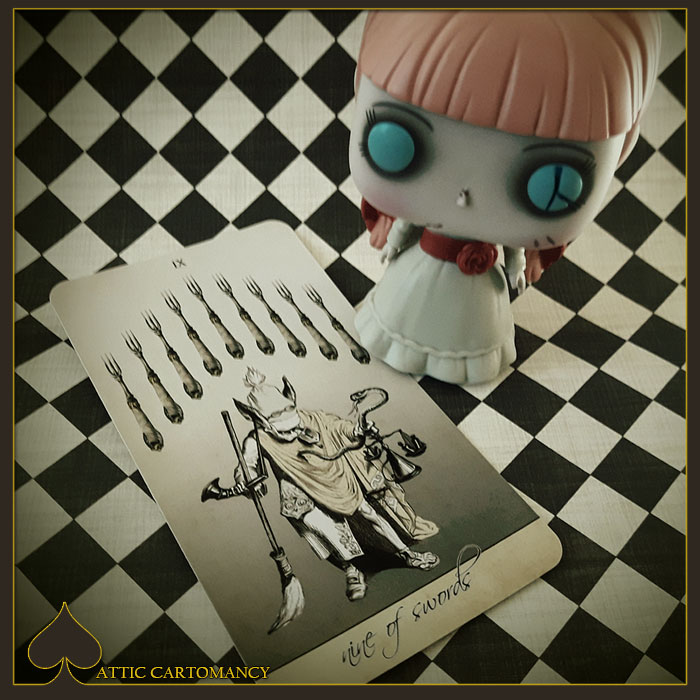 I had a nightmare last night. Not to be so literal with this card, but I did. It came after a day of unhappy remembering.

It was time to send out updates to my family. I sent my aunt a progress shot of my healed knee. But to nab it, I saw a preview of the original injury. Jarring. Later I had a nice talk with my mother-in-law and she asked for a run down on my healing. Then told me, now that so much time had past, that after raising three hyper, injury prone boys she wasn’t squeamish. But when she saw my knee it looked like the place where you tear a chicken thigh off of the chick’s body. Sobering. Finally, when Myke and I left to grab dinner, after weeks of being free of it, I got vertigo at the top of our front steps. Meh. So naturally I had a nightmare during sleeping hours.

A sentient staircase was following me around promising me a bottomless bowl of reese peanut butter cups at the top. It was all shadowy and sneaky sneaky. I kept trying to tell it to go away. “Not if you had the last peanut butter cup in the world Mr Spooky Stairs!” And that says something. I do love me some reese.

When I was first learning this card I often thought of it representing the fact that we can be our own worst enemies. We allow in the stuff of nightmares. So yeah, I keep reliving my nightmare. I snagged my sock on the edge of the top step and had a tumble. I tried to rip a few fingers off, crushed my orbital bone, got the chance to have a one on one conversation with my kneecap, and yes; I had beautifully red waterfalls cascading over my brain for awhile. It was perfectly nightmarish. What came after was pain, fear, anxiety, depression, and agoraphobia. Seems understandable. And that will put anyone at a crossroads: Get busy trying to heal or let the nightmare eat you up. That’s what I realized as I would draw a card here and there and this one popped up. (It didn’t help that I choose a Grandville piece that looked like a literal nightmare to me.) The point for meditating with the tarot for me is to be thoughtful. So I thought about it and yes… it was time to wake myself up from the nightmare.

Totally deep, eh? Eh? But seriously, so many of my card of the day posts revolve around that accident. Mostly because I live day to day with constant reminders of it. When I’m alone in the house I have to psyche myself up to go down to the basement for laundry. Or to go up the stairs in question to get to my workroom. The numbness in my face from my orbital bone implant is finally starting to wear off. It leaves me with weird tingles and a soreness over my cheek and eye. My vision will be good one day and blurry the next. And frankly, depression is a tough beast that winter likes to make worse. It’s hard to be chipper. It’s hard to be positive. But it’s something that must be attempted a little each day so the nightmares can get better. So this topic is one I’m always thinking of and needing to find ways to work through it.

It may be tough, but I can handle it… mostly. And I really want a reese now but that boogeyman stairway spooked me! I’ve tackled this card before, slightly more simplistic. That post is here.