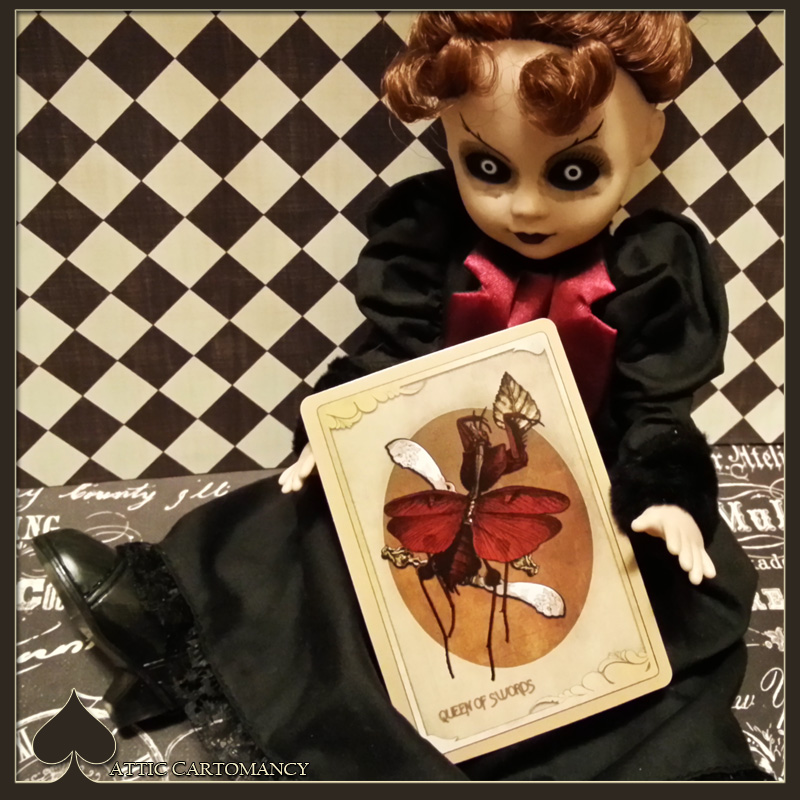 Today’s card is the Queen of Swords. Traditionally this is a no nonsense lady who is all about independence, intellect and using logic and common sense to make a decision. You don’t get anything by this woman and she certainly doesn’t mince words. You won’t be able to appeal to her empathy either. Emotions are set to the side when this lady is figuring something out or dealing with someone. You could say this is a card that asks you to tackle your question in a mature and thoughtful manner where you don’t let your emotions cloud your judgement. Sometimes you have to be honest with yourself.

The card featured here (modeled by the–eh hem–lovely Lizzy Borden doll) is from my Black Ibis tarot. I have a great love of insects, especially Praying Mantis. In matching insects to the symbolism I wanted (I stayed a bit more traditional with the major arcana and then strayed off the path for its minor arcana) a creature that was strong, pretty no nonsense, and one that didn’t let emotions get in the way. I know, I know, the lady mantis really doesn’t let emotions get in the way and she might represent an extreme. I just found her to be very powerful and liked her for the card. 🙂 She offers wonderful advice though and asks that you approach your pondering from her view point.