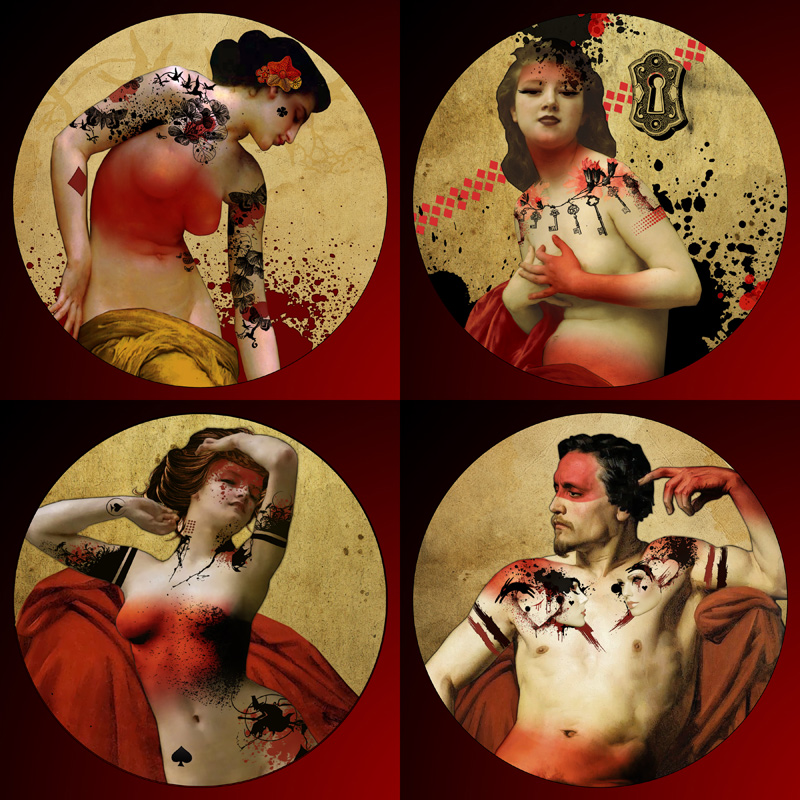 I have three deck projects going on right now and I have to decide which one I want to settle on. I’m working on one with a game publisher where I’m adding a minor arcana on an existing major arcana – I have a defined timeline with that. There’s wiggle room. Then I have a Lenormand and Oracle projects to do on my own time. My own time translates to what I do at the end of the night when I’m just doing stuff for me.

A few nights ago I had a conversation with Myke about creative output as an artist. For me, who has no defined income, I have to apply myself at all times to create new and make sales on the old. I have no regulated income. I take in as much as I put in and sometimes I feel like I spend all my time just putting in. Not even on one thing. I juggle because I have to. Sometimes that removes a little bit of my joy when creating something 2new that I’m into. I have long since accepted this as a part of being a working artist.

He and I exist on two different sides of a coin we both understand the nature of. With a defined job we know bills get paid and an expectation of our day to day is achieved. With an undefined artist life, money comes in sporadically and we can’t be guaranteed we can always pay our bills. This puts us in a precarious place of two artists, same desires, one household. I wake up each day grateful (beyond what anyone can understand) that one of us has stability after we’ve known some chaotic points.

This leads to conversations though. Recently Myke spoke (on his facebook page) of how he feels as an incredible artist who has his good job and not as many opportunities of creativity now because of it. On the other end is me, who finally has someone I can depend upon beyond my aunt who has given me an opportunity to try for my goals. At the same time? Slowly I’ve taken less and less pleasure in the creative things that give me joy in life. What I do is turned into business and profit nearly the moment it comes into being. If I make a deck, then we figure out how that deck can be sold. It eats at my soul in the same way any day to day job has. The only difference is I have less guarantee of my pay check. Being self employed allows for no comfort.

This is a very strange place for both of us to be. We’ve both struggled to survive on our creative income, just as we’ve both turned away from it to have a normal job where we lived with someone we had to pay for. Every time Offsprings “Get a Job” comes on the radio I think of an ex I dated where he thought it was my job (being employed at the time) to support his smokes and Mountain Dew addiction. And then when he had a job he felt he didn’t need to pay for his internet access and so on. And Myke? Well, I’m glad I’ve never been with a woman who needed her fancy nail addiction tended to. The point being, we’ve been on each end of the spectrum. Thank god we’re not there anymore.

Back to the conversation at hand: When I look at a new project I worry over what will be most profitable. It’s the one thing I truly hate about being a working “artist” – especially when some of my projects are more about being a working commercial artist and not a creative one. What will be most lucrative? It’s something that pisses me off at times. Too often have I seen some faker turn out pompous crap and throw a price tag on it and the world bends over backwards to buy it and pump up that idiot. I tend to think true art, in any medium or fashion, is where the artist puts themselves into it and gets what they can from it before the point of sale comes into effect.

Where was I? Yes, new deck projects. I’m leaning towards the samples here – my Ink and Blood Lenormand. I haven’t (as of yet, not saying they aren’t out there, I just haven’t looked yet) seen a Lenormand deck that was a bit more crass. Tarot decks get all kinds of treatments from so many different art types. I haven’t seen the same from the Lenormand decks. This might be a product of the deck’s nature. It’s not as well known or as popular as the other. I think this is why I like it. This current project is William-Adolphe Bouguereau public domain paintings that I go over with trash polka tattoo styles. This will sound weird to say there is this huge Watership Down influence as well. I have a clear picture in my head of where this deck is going. I think this will be my personal summer project.