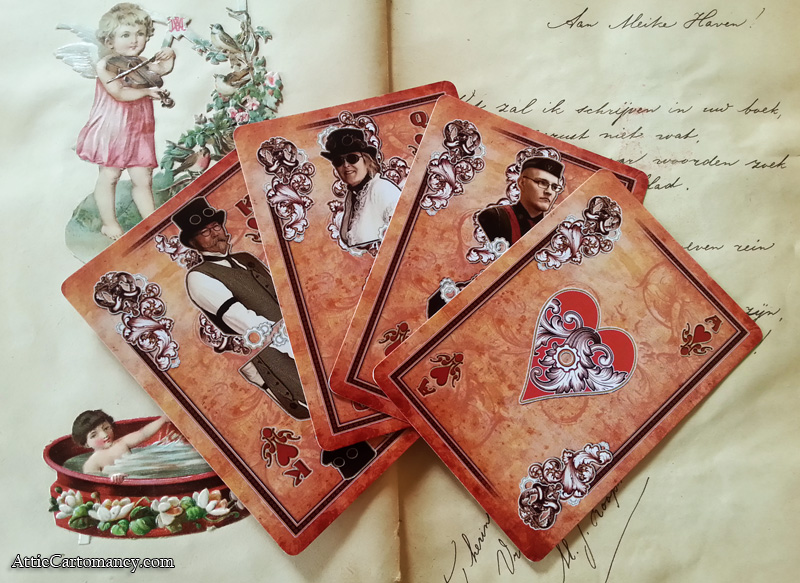 I’ve been a part of the Michigan steampunk scene since around 2009. My first event was vending at the Steampunk Expo and there I met so many wonderful people who I’ve gotten to know over the years. There was one couple I first saw there and then at many events afterwards. Though I never knew them by name for a very long time, I always knew them. They were always dressed fabulously and always looked so happy. This couple I would learn was Don and Sue Watts.

I was asked to be a guest of honor at the first year of The Motor City Steam Con and as their guest artist I wanted to contribute something noteworthy to it. I’ve made a lot of decks, but never a simple deck of playing cards, so I suggested that. Sal, the event organizer (and great chick), and I worked out who in our Michigan steampunk community should be featured on the trump cards. Sal asked if I would put the Watts on the hearts suit. By this point Sue was very ill and we wanted to celebrate this wonderful couple and all they offered our community. So Don became my King of Hearts, Sue my Queen, and their son Kyle the Jack. (Kyle’s wife Jenny is also in the deck as the Jack of Diamonds.)

Sue has since passed. I never knew her very well, but I knew better the people around her and all of them have nothing but incredibly beautiful things to say about her. I’m very glad I was able to offer this small thing to the Michigan steampunk community, who have supported me through the years. This deck is no longer available for sale online, it’s a convention only type item. But I do have the whole deck to preview here. I wanted to highlight my hearts and the story behind them for this Valentine’s Day.

On a sentimental note: I came across my great, great grandmother Meike’s sentiment book. As best I can figure it’s well wishes to her on her wedding day. It’s written in Friesland Dutch so I can’t make out too much of what’s said. It’s a beautiful book, two pages which are under my heart cards. It’s from the turn of the 20th century so it’s pretty antique.