This is a vibrant and beautiful tarot that features exotic creatures and antique enchanted artifacts. Originally created as a companion piece to a graphic novel of the same name. You can see all of the card artwork here or scroll down to learn more about the deck.

CYBER YARD SALE TILL STOCK IS GONE! We have to close Bethalynne’s shops right now and put some of her blogs into hibernation. She has gone into liver failure and is being fast tracked for a double transplant. Right now she spends much of her time sleeping and writing when she is awake. Given that her co-pay medical bills are getting steep, I trekked into her workroom and packaged up all the items that were ready go out. If it’s not packaged and listed, it’s not available. I can’t accommodate requests and I’m not sure when the shop will open again.

Thank you for all of the support you’ve shown her over the last two years.

ABOUT THIS DECK: The Black Ibis Tarot is my second tarot deck and somewhat eclectic in style. This deck is a companion deck to my first deck the Sepia Stains Tarot and both originated in the Black Ibis graphic novel. In the story the decks are used to play a game that allows for peaceful resolution of disputes in an underground world. The Sepia deck offers character portraits while this deck we tried to recreate scenes from the story. The artwork is done in the style of the graphic novel and features symbolism lightly influenced by the Rider Waite Smith deck, at least as far as the major arcana goes. The minor arcana uses pips and characters from propaganda posters from the graphic novel.

DECK DETAILS: The cards are 2.75″ x 4.75″ in size. They’re printed on 300gsm card-stock that is sturdy and has a smooth finish. Cards have a blue core that helps prevent transparency of the card so both sides feature brilliant colors. They’re very easy to shuffle and good for everyday use. This listing is for the larger card, third edition of the deck and features the deck and companion book. Thank you for your interest in adopting a deck! 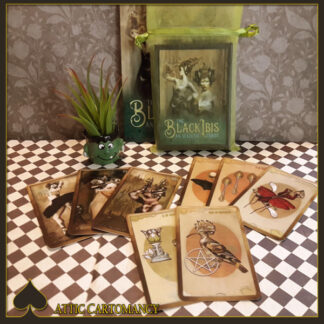