The Isidore Tarot Third Edition – This Sale is over. Next Sale TBA 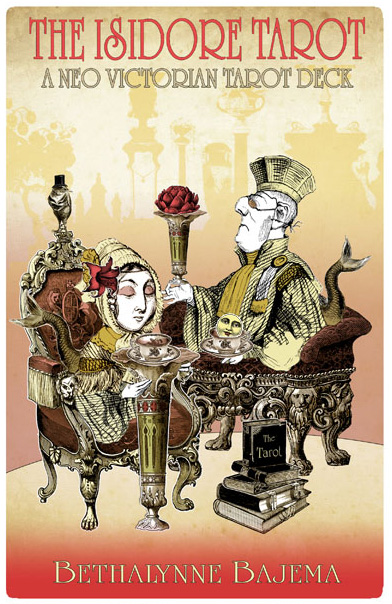 The Isidore Tarot is my baby. I love all of my artistic creations, but I absolutely love this tarot. It’s a charmed deck that brings me nothing but joy. It only takes a brief viewing of my artistic portfolio to see that it is perhaps the brightest and most soft edged thing I’ve ever created. Perhaps I’m growing a little more subdued in my older age. 😉

The Isidore Tarot Deck is an art collage style tarot that uses vintage illustrations by J.J. Grandville to recreate the symbolism of the Rider Waite Smith tarot deck. Grandville’s characters are turned into new characters with the aid of Victorian era ink illustrations and additional ink detailing to fill out the collage. Grandville’s work was taken from his book Le Metamorphoses du Jour in the public domain. Once the cards were done, they were given a themed color palette. The major arcana is heavy in rich crimsons and pale gold. Each of the minor suites are colored based upon the element they represent. The original idea for the style of collage is based upon Max Ernst’s Une semaine de bonté collection.

The Isidore Tarot debuted the autumn of 2013 as the first card deck published by The Attic Shoppe Trading Co., my family’s small art studio. Since that time it has gradually been refined and released in distinct numbered editions (the first edition and second edition can be seen here) and several special or limited editions.

December of 2017 the second edition was retired to make way for the new third edition (preview below) in January 2018. The third edition is the first time the deck has been offered without the white borders; one of the details of the deck that has been requested for some time now. The king and queen of the cups suit became the focus of the packaging, as the moon keeps watch on the card backs. A novelty Happy Squirrel card was added to the deck, though it does come with its own meanings and can be removed from the deck or incorporated into it. To keep with my tradition of offering alternative versions of the deck in the past, I created the Sea and Sand edition for spring. This version flips the crimson and gold color wheel to water blues and sand hues.

As this is my baby, the Isidore Tarot has its own website. There I have samples of all the previous standard, limited, and special editions. Occasionally I also have OOAK packaging for a deck. I also have a scrapbook featuring some of the deck’s highlights over the years. You can preview the current edition below. Scroll to the bottom if you’d like to learn a little more about the Isidore behind the deck! 🙂

The Major Arcana
The Coins Suit
The Cups Suit
The Swords Suit
The Wands Suit
And now, who is this Isidore character?

“A delicate and sarcastic smile, eyes sparkling with intelligence, a satirical mouth, short figure and large heart and a delightful tincture of melancholy perceptible everywhere -that is your portrait, dear Grandville!” From Alexandre Dumas’ introduction to a chapter of his memoirs that is dedicated to Grandville.

I started a project called An Autumn with Isidore where I took a variety of black and white illustrations by artist J.J. Grandville (1803-1847), one of my young art crushes, and used them to create new images with the same sort of whimsical and surreal scenes in mind. Originally the project was just to help me focus on something fun that was done in my down time and allowed me to set my more demanding commission work to the side. It was such a drastic departure from my typical art style that I wasn’t even sure how it would fit into my portfolio. I did add it to my online portfolio though and used it as a way to wave at my followers and tell them I was still alive and kicking. Not long after I was approached about the idea of reworking some of the collages into a major arcana. I started at the beginning and began work on the Fool card and it came so quickly and naturally, the deck just seemed to create itself from that point on.

This deck has done very well and I’m quite proud of it. I’m also happy to have an opportunity to introduce people to Grandville who may not have had a name to put to his art. I think nearly everyone who has spent any time floating about the internet has seen at least one of his illustrations; they’re hard to avoid and he was very prolific during his short life. You should be introduced to the man proper. This is a wonderful article about Grandville. It is very complete and links to numerous galleries and resources for the artist. I highly recommend taking a moment to read through and get to know him! Sadly he wasn’t in the world as flesh and bone for very long, but while he was here he left an incredible illustrated legacy and he should always be remembered for it. I hope to keep his memory and spirit in art alive and well.